We conducted an interview with Damaria Senne of Damaria Senne Media, South African author of many books including the children’s book “The Doll That Grew”

What inspired you to start writing?

I knew I wanted to write when I was in my early teens, when I figured out that someone had to write the books I was reading. But my career path seemed set at the time – I was going to complete matric, go to varsity and either study medicine or do a BSc and work as a scientist. I even started a Bsc degree. But I was not happy in this path and during my second year at university, I began to write for the student paper. I also landed a job as a TV presenter for a daily children’s show, which exposed me to scripts and writing for children. Around that time, I was also teaching Sunday school. So writing my first book – a children’s book- seemed to be a natural progression considering my interests. I was still a science student at the time I wrote the book though.

What was the name of your first book?

My first published children’s book was The Doll That Grew. Yep, it’s the same book that I released recently as a Kindle ebook. It was first published by Macmillan South Africa in 2003.

The first book I wrote though, was a romance book. I don’t remember its title, but I remember it was about falling in love and child abuse. I sent it to publishers to consider publish it and the input was positive. However, local publishers were not looking at romance novels at that time (late 80s and early 90s).

What current projects do you have under way?

My projects are divided into client projects (i.e. commissioned work that pays my bills) and personal projects, where I write and publish books that I initiate.

At the moment I’m in the final stages of editing Tselane And The Giant, writing a course I’m co-writing for a client, managing the publishing process of 6 books for a client and overseeing the publication of a novel by another writer, that will be released under the banner of my media company, Damaria Senne Media.

Where can people find out more about you?

You can learn more about me and my company at http://www.damariasennemedia.com/ and on my blog at http://damariasenne.blogspot.com/

Can you quote one of the best parts of your books for us and where can people buy your books?

Here is a short excerpt from The Doll That Grew, available on Amazon 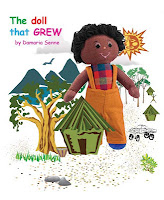 “On your marks, get set, ready, go!” the race-starter shouted. All the kids sped off, pushing their cars as fast as they could.

It was difficult to see through the thick cloud of dust to tell who was in the lead.

The younger kids ran after them egging them on, followed by some of the village dogs barking with excitement.

The trick was to steer the wire car as fast as you could on the dusty, bumpy street to the end of the street, careful not to bend any of the wheels. You needed two things to stand a chance of winning– a strong car with wheels that would not jam or bend when they hit the rocks on the street, and a driver who could run very fast.

Neo was a very fast runner, but could she outrun the boys whilst steering the car?

Neo had only one boy ahead of her in the race. She could win! Neo could feel the sting of the dust in her eyes as she looked back quickly to see how far ahead she was of the rest.

Satisfied with her position, she turned to focus on the last few meters and then it happened… Neo found herself rolling in the dust like tumbleweed with her brother’s car following.

The barking dogs, screaming children and tit-tit-tit of the wire wheels speeding past all sounded like one maddening noise in her ears, as she slowed down to a stop.

She wasn’t sure whether to focus on the embarrassment of what had just happened, or the pain from her grazed skin. She limped home dragging Pule’s mangled car behind her.

“See what you’ve done!” he shouted, blinded to his sister’s injuries.

“I didn’t do it on purpose!” Neo shouted back at him. “Why are you being so mean to me?”

Her legs and one arm now had a pattern of drying trickles of blood and dust, and her clothes and braids were a mess.

“You should have been more careful. You said that you would take care of the car when you borrowed it. Now look at it!”

Pule picked up his smashed car, handling it with care.

My other ebooks are:

How to get quoted in the media 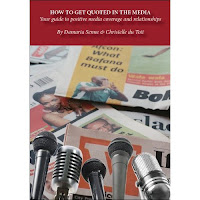 With the way the technological world is going, what advice do you have for young writers of today?

a) The resources to help you to improve your craft are freely available online. Use them. However, always check the credentials of the person giving you advice, because bad advice can be very damaging to your career.

b) Be adventurous and try out new ways of doing things. For example, find out what ebook publishers can offer you. Consider self-publishing if you have the resources to do it. BUT, traditional publishing is not dead – so don’t rule out opportunities to explore that avenue ( and other old-style ways of doing things) as long as it works for you.

How do you see the art of reading and writing surviving into the future?

More people are going to read from their electronic devices ( ebook readers, smartphones, iPads etc). But, the print book will survive, I believe. Do you remember the song, ‘Video Killed The Radio Star, by The Buggles? Well, it wasn’t quite true, was it? We still have radio stars ( think DJ Fresh, john Robbie, Redi Tlhabi). By the same token, I think the reports of the death of the dead tree book are exaggerated.

Damaria Senne of Damaria Senne Media, South African author of many books including the children’s book “The Doll That Grew”